JAKARTA, Indonesia, May 26, 2022 /PRNewswire/ — At the 2022 Global Platform for Disaster Risk Reduction (GPDRR) event, the Government of Indonesia offered the world the concept of sustainable resilience as a solution to address the challenges of systemic disaster risk. 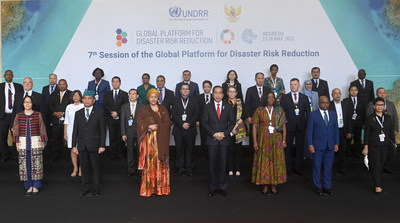 Indonesian President Joko Widodo highlighted this concept at the opening ceremony of the 2022 GPDRR in Nusa Dua, here, on Wednesday.

The sustainable resilience concept is considered to be a solution to tackle all forms of disasters, including facing a pandemic and concurrently supporting the implementation of the Sustainable Development Goals (SDGs), Jokowi remarked.

He highlighted the need to apply several measures to build sustainable resilience.

“First, we should strengthen an anticipatory, responsive, and adaptive disaster preparedness culture as well as institutions in dealing with disasters,” President Jokowi stated.

According to the president, disaster mitigation education and government institutions that are synergistic and responsive to disasters must become a shared priority.

Jokowi explained that the second measure deemed necessary is for every country to invest in science, innovation, and technology, including in ensuring access to finance and technology transfer.

“Access to funding is an important issue that we must take seriously. Indonesia has developed a strategy for funding and disaster insurance by establishing a pooling fund and using development funds at local levels to support disaster mitigation and preparedness,” he stated.

The third measure is by building infrastructure that is resilient to disasters and climate change.

“The protection of vulnerable groups living in high disaster risk areas must also get special attention,” he stressed.

Lastly, the Indonesian president invited all countries to commit to implementing global agreements at the national and local levels.

“The Sendai Framework, the Paris Agreement, and the SDGs are important international agreements in the efforts to reduce disaster risk and climate change. I invite all countries to be committed and serious about implementing it,” Jokowi stated.

He affirmed that disaster risk reduction is an effective investment to prevent future losses.

“To that end, we affirm Indonesia’s commitment to implementing the Sendai Framework as well as other international commitments,” he stressed.

The head of state also expressed Indonesia’s readiness to share experiences and knowledge in disaster mitigation.

“As a disaster-prone country, Indonesia has accumulated knowledge and experience that can be an important lesson for the world, but Indonesia is also eager to learn from international experience,” Jokowo emphasized.

“Let’s work together to mitigate (impacts and manage risks with regard to) the rise in disasters for a better life today and tomorrow,” he concluded.

Appreciation
On the occasion, several United Nations (UN) officials — President of the 76th Session of the UN General Assembly Abdulla Shahid, UN Deputy Secretary General Amina Mohammed, and Special Representative of the UN Secretary General for Disaster Risk Reduction Mami Mizutori — lauded Indonesia for being successful in controlling COVID-19, so that the 2022 GPDRR forum could be held in-person in Nusa Dua, Bali.

“I would like to convey the appreciation of the UN to the president of Indonesia and the people for hosting the 2022 GPDRR,” Mohammed stated at the opening ceremony.

“I would like to congratulate and appreciate Indonesia for the measures that have been taken to address COVID (as a) response that had allowed us to meet in this conference here in-person,” she stated.

According to the UN deputy secretary general, Indonesia’s efforts to vaccinate its population of 217 million people is a major achievement.

“We applaud the leader of Indonesia for its vaccine program for keeping everyone safe and reacting and responding to the COVID pandemic,” she stated.

She also affirmed that Indonesia is a critical partner that has taught the world a lot about disaster risk reduction.

“Your willingness to host this important gathering is a testament to theleading role that you (Indonesia) play in sustaining development and climate action,” she remarked.

Meanwhile, the United Nations Office for Disaster Risk Reduction (UNDRR) Director Ricardo Mena lauded Indonesia as a country that is leading in the global efforts for disaster risk reduction.

“This is a very important (effort), and I think this is where we think that Indonesia is leading in terms of the global efforts to reduce disaster risks,” Ricardo Mena stated in a special interview with ANTARA here on Monday (May 23).

Mena remarked that Indonesia has put forth a strong message about the importance of disaster risk reduction efforts by hosting the 2022 GPDRR.

“We believe that Indonesia is giving a very strong message through the engagement and hosting of the GPDRR here in Bali. We are very thankful to the Indonesian Government for that,” he remarked.

“I think what I would like to highlight is that Indonesia is one of the few countries in the world that has adopted a very long term plan to reduce disaster risks,” he remarked.

“This is very important because if you want to really address the root causes, and you cannot do it in two, three, or five years. It is impossible, and we look and welcome very much the fact that Indonesia has a plan to reduce disaster risks that goes even beyond 2040,” he added.

To that end, Mena also encouraged other countries to follow Indonesia’s steps in adopting long-term plans for disaster risk reduction.

Indonesia hosts a series of meetings of the 7th Session of the Global Platform for Disaster Risk Reduction (GP2022) in Bali on May 23-28, 2022.